Excerpt of the Week - Forgotten

Here's this week's excerpt from my novel, Forgotten. Description below:

For as long as anyone can remember, The Dwellers have lived on the mountain near Forgotten. After remaining dormant for years, they've returned. Hungry. Demanding sacrifice.

The locals have their eye on unsuspecting travelers, intent on sacrificing them to the Dwellers. As visitors to the town discover, Forgotten is not kind to strangers.

Three groups of travelers are in for a hellish visit to Forgotten. A father's teenage son disappears on the mountain. A pair of vacationers are ambushed on the road outside town. A private investigator delves into the disappearance of a college student, only to become trapped in a nightmare scenario.

Forgotten. Plenty come to visit. Not everyone leaves.


Griggs had gotten the call from dispatch: report of a possible intruder on Pine Top Road, please investigate. Apparently someone's dog had started going crazy and the owner had seen someone out by their shed.
He'd been Sheriff in the town of Forgotten for fifteen years and calls like this were far and few between. It was mostly peaceful. They got a lot of tourists who came to get a taste of Big Sky Country and the mountain air, but there was little crime.
He pulled the Crown Vic up to the house, a brick ranch with white trim around the windows. It was the beginning of October, and the owner had placed a trio of pumpkins and a dried cornstalk on their porch.
Griggs radioed that he was on the scene and got out of the cruiser.  Once at the front door, he rang the bell and a middle-aged couple in matching white robes opened the door. The man was balding and his belly strained the belt on the robe. The woman was pretty, even though she had some crow's feet around her eyes.
“Officer, we're glad you're here,” the man said.
“It's Sheriff. We got the complaint about an intruder?”
“Yes, come in.”
Griggs stepped into the living room, where a girl of about nine slept on the couch.
“You're Mr. Hardin?” Griggs asked.
“Eric. This is my wife Theresa.”
Theresa said, “Shadow, our German Shepherd, started going nuts. I had just let him out. When I went to see what he was barking about, I saw a large man in the woods.”
“What happened after you saw him?”
“He slipped back into the woods.”
“Okay. Stay here and I'll go investigate.”
Shadow came bounding into the room, gave a hearty bark, and sat at Theresa's feet. His ears went back and he began to whine. The Shepherd attempted to bury it's head in Theresa's leg. Some watch dog. Something must have spooked him.
“Is he normally timid?” Griggs asked.
Eric said, “Usually he's fearless. Something got him scared.”
“All right. Where did you see the intruder exactly?”
“Out by the shed. Back of the property,” Eric said.
“Stay here. I'll go around and have a look,” Griggs said, taking a flashlight from his belt.
He rounded the house and started down the driveway. The rotten-sweet smell of garbage came from trash cans left by the side of the house. A girl's bike with tassels on the handlebar grips had been left on its side.
The yard contained a patio near a sliding glass door. Nearby, a table and chairs had been wrapped in a blue tarp, stored for the winter. He saw the shed, its white siding illuminated in the moonlight.
He shined his light on the shed and then the woods beyond. The breeze picked up, causing the pines to sway. Something tipped over and made a banging noise. He shined the light and saw that a spade had fallen over.
Moving forward, he swept the light back and forth. He kept his other hand on the Glock. The old-timers in town, the men that hung around the diner and drank endless cups of coffee, spoke of strange things happening up in the mountains. Some of them he believed. Some he didn't.  No doubt these stories fed the imagination of Forgotten's residents.
He drew closer to the shed and was beginning to think the dog had been barking at shadows.
A pile of pressure-treated lumber lay on the ground behind the shed. He checked the ground and saw no footprints.  The shed had two front windows and he peered in the nearest one. After determining there was no intruder in the shed, Griggs was ready to head back to the house.
A branch snapped, sounding like a whip-crack. It had come from the woods.
He crept to the edge of the woods and shined the light. The beam only went so far before it was devoured by the shadows.
“Police. Come out,” he said, drawing his Glock. He'd only fired it on the range. Firing on a person was completely different.
Another branch snapped, this one sounding like a gunshot.
Something walked between two trees. Its head brushed a branch that had to be seven feet off the ground.  His heartbeat began to pick up and he took a deep breath to steady himself.  A huge rock or club hung from one hand. The head was malformed, as if someone had squished a piece of clay into a nightmarish form.
“Police,” he said, but the giant paid him no attention and bounded into the woods, branches crackling as it went. The legends spun in diners just might be true.
He backed away from the woods, sweeping the Glock back and forth in case the intruder returned. It wasn't until he got within ten yards of the house that he turned his back on the woods.
He leaned against the side of the house and let out a huge breath. If he told the family what he'd seen, they'd never believe it; something less-than-human lurking in the woods.
Once his hands stopped shaking, he holstered the Glock. Then he went to the front door and rang the bell.
Eric came to the door, his face hopeful. The bathrobe had come open, revealing coarse black chest hair.
“Find anything?” Eric asked.
“Just some broken branches. I think your culprit was probably a deer.”
Eric let out a huge sigh. “Thank you. We were so startled we brought our daughter to sleep downstairs. Shadow never gets upset and when he did, it spooked us. I'm sorry we wasted your time.”
“All part of my job,” Griggs said. “Call if there's any other trouble.”


Available for Kindle, Kobo and Nook. 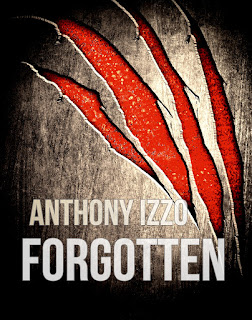