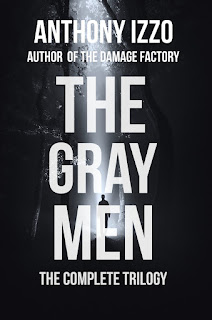 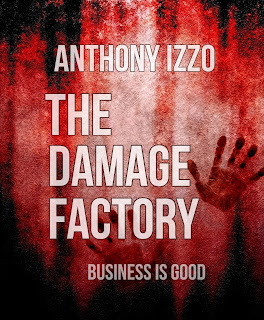 The Damage Factory
Copyright 2017 Anthony Izzo
Don’t write anything down. Don’t tell anyone you talked to me. And for God’s sake, make sure no one follows you.
That’s what the rough-sounding voice on the phone had told him.
John George pulled up to the hulking warehouse, wondering if he should turn back, the man’s words echoing in his mind. He didn’t. Instead, he got out of the car and immediately smelled the dead fish odor coming off the lake.
He went to the passenger’s side, opened the door, and took out a bulky manila envelope.
As he approached a steel door, he noticed a security camera mounted overhead. There was a doorbell mounted on the wall. He pressed it and heard a loud bell echo from somewhere in the warehouse. It reminded him of the old fire alarm in his elementary school.
He waited, used to being patient. Used to being alone these days. In the evening he would heat himself up a frozen entrée, the French bread pizzas being his favorite. His expanding belly was proof of his love of frozen foods.
There was no need for large meals or extensive grocery lists.
Occasionally, he would eat Italian at Marcos, sticking with Chicken Parm and a glass of house red. It always felt to John that the waitresses were taking pity on him, calling him sweetie. He must’ve seemed like a sad case.
After dinner, he would return home and sift through photos on the computer, looking at their trips to Bar Harbor and the Outer Banks. More often than not, the night ended with him in tears.
The door swung open and a guy in a flannel, work boots, and paint-spattered jeans answered. He was half a head shorter than John but his neck was like a tree trunk. “You John?”
“That’s me.”
“Follow me,” the guy said.
John followed the man to small room at the rear of the warehouse. Inside was a table surrounded by wooden folding chairs.
“Take a seat,” the man said.
John pulled out a chair and sat down. The guy took a seat on the other side.
“Are you sure about this?” the man said.
“Did I talk you on the phone?”
“Don’t worry who you talked to. Once we start things in motion, there’s no going back.”
“I’m sure.”
“Where’s the money?”
John slid the envelope across the table. As the man reached for it, his shirt hiked up and John saw a chrome .45 in a holster.
“You can call me Rex,” the guy said, and dumped the bundles of cash on the table. John had emptied out his 401K for the cash.
Rex did a quick count of the money. “All here. Good boy.”
“I’m not a dog,” John said.
“We’ll go over this again. Like on the phone. No cops. No news. We’ll contact you with updates. You turn on us? We turn on you. Here’s what happened to the last guy that tried it.”
He took two photos from his breast pocket and slid them across the table. John took a look, saw a headshot of a man lying on some sort of table. Most of the skin was removed from his face.
“That was done while he was alive,” Rex said.
“I won’t cross you. I want these people to suffer,” John said.
“They will. Believe me. It’s what we do.”
“How will I know when it starts?”
“We’ll contact you.”
John said, “I’ll need proof.”
“Let us worry about that. Someone will be in touch, like I said. However, if you have an emergency. If someone’s on to you, take this,” Rex said, and pulled a crème-colored business card from his pocket. He slid it across the table.
The Damage Factory was printed on it in small, black letters. Below that was a phone number, most likely a burner phone.
John put it in his wallet as if it were a sensitive explosive.
“Don’t fucking lose it. We’ll be in touch. And don’t worry, you came to the right place.”
at July 03, 2020 No comments: