Here's an excerpt from my upcoming novel, The Damage Factory.

What would you do if a secret criminal organization was hired to destroy your life? Three unsuspecting people tied together by a tragic event are about to find out.

Jason Matthews suspected he was being followed.
The black Range Rover had matched his lane shifts, hanging back just enough to seem inconspicuous. Jason hadn’t noticed it until he’d neared the grocery store. Was he being followed?
Fuck it. You’re being paranoid.
While he was on his way to Wegman’s, his phone had buzzed several times. He’d taken it out and saw a missed call from Erin.
He’d checked in with her a while ago, thinking he’d be home soon, but a two-car accident had slowed traffic and put him behind.
He’d have to call Erin when he got inside. Paige was likely getting an itchy remote finger and wanted to start the movie.
He turned into the Wegman’s parking lot and found a spot. Parked the car and got out. He scanned the lot but saw no sign of the Range Rover. He chalked it up to being paranoid.
It had been a few hours since he’d last gone to the bathroom, and his bladder felt heavy, the large Starbuck’s coffee he had earlier doing its job.
He headed inside, passing a display of tomatoes and ducking into the alcove that housed the restrooms.
He entered the men’s room, the scent of a flowery air freshener filling the air. The men’s room was empty. He stood at the urinal, unzipped, and sighed at the relief as his bladder emptied.
He’d call Erin when he was finished.
The door squealed open behind him. Someone said, “Get lost. Closing for maintenance.”
He finished urinating and zipped up. Thought about the potential client he’d met with earlier; they wanted him to write for their website and social media outlets. It would be a nice job. And steady. His freelance business was taking off, and between that and Erin’s pension, they were doing okay financially.
When he turned around, a man was standing and grinning at him. He was big in the chest and shoulders, stood slightly stooped over. He wore a gray sport coat, black slacks, and a crisp, white shirt.
Jason started forward. The guy stepped in front of him.
“Do you mind?” Jason said.
The guy grabbed a handful of Jason’s shirt and pulled him close. “Listen to me. There’s a razor-sharp knife pointed at your thigh. One slip and it will likely sever some sensitive parts.”
Jason’s heart kicked hard in his chest. Couldn’t believe this was happening. “Wallet’s in my back pocket.”
“I don’t give a fuck about your wallet. Now we only have a minute before someone comes strolling in. I already had to scare one asshole out of coming in here. I’m going to take a step back. If you yell, I’ll pull down your pants and start cutting. Got it?”
He didn’t doubt the man. He spoke with the true calm only a true psychopath would possess. Or so Jason imagined.
“We’re going to walk out together, just like the best of friends. And in case you’re getting ideas, think about what could happen to Erin and Paige, huh?”
“Son of a bitch,” Jason said. “How do you know about my family?”
“Easy. Let’s walk before someone else comes in,” the man said.
Like a magician doing slight-of-hand, he swapped the knife for a small, semiautomatic pistol. He slipped it in his front pocket and kept his hand on it. “Just so you know it’s here. Think about that family. Matter of fact, don’t stop thinking about them.”


As they left the alcove and passed the displays of tomatoes in the produce department, no one gave them a second glance. A bored teenager mopped the floor nearby.
A pretty, young woman was trying to corral a toddler, who was attempting to climb from the shopping cart.
When they exited, Jason looked up at the security monitor, hoping they would get his face on camera. Out in the parking lot, they climbed into the Range Rover, the guy instructing Jason to sit tight in the passenger’s seat.
The man climbed into the driver’s seat and pointed the semiautomatic at Jason across the console. He started up the Range Rover and pulled out of the spot, putting the gun back on Jason.
He thought of Erin and Paige, how he might not see them again. He did a mental checklist, trying to figure out if he knew his abductor. Came up blank. There was no reason anyone would want to kidnap him; they certainly weren’t rich.
“Don’t try anything. If you try and jump out, I’ll shoot you. The bullet will likely sever your spine.”
“You make it sound so tempting.”
The guy actually laughed at that, and Jason thought for a second about making a move, but instead he stayed rooted to the spot.

He did nothing, watching in the rearview mirror as the store diminished.
at February 25, 2017 No comments:

This is with my proofreader right now. Should be on sale within the next week or so. More to come. 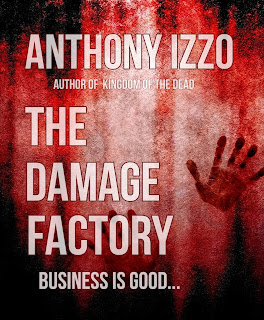