I left one film off my list of horror favorites. Pumpkinhead, which was Stan Winston's directorial debut.

October is my favorite month of the year. Not necessarily because of Halloween. I just love a blustery October day, the changing of the leaves, seeing a full moon on a cold Fall night. Maybe it's the horror writer in me. Seeing as I've listed my favorite horror novels in a previous post, today I'm putting up some of my favorite horror films.

Halloween (1979)  Carpenter wisely leaves much of Michael Myers' motivations and back story to our imagination, creating a faceless terror that is as scary today as it was thirty years ago.

Alien (1979) A masterpiece.  The chest bursting scene is the most referenced scene in the movie.  For my money, the scariest sequence is when Dallas creeps through the bowels of the ship, searching for the Alien. We see him tracking the Alien with a motion detector until finally he finds the creature (or the creature finds him).  Gets me every time.

Paranormal Activity (2007) This one goes for a slow build, but it's worth the wait.  Proves sometimes what you don't see in a film is scarier than what you do.

The Descent (2005) A group of female adventurers goes spelunking only to find they're not alone. The caves provide a creepy, claustrophobic feel. But that's nothing compared to what they find in the caves. I saw the unrated version, and if you're a fan of gore, you won't be disappointed.

The Road (2009) A horror film (although not presented as such) based on Cormac McCarthy's Pulitzer Prize winning novel. See if the scene when The Man and his son search the seemingly empty house doesn't give you chills.
at October 26, 2010 2 comments:

Thought I'd rattle off a list of top ten horror novels. These are novels that always stick with me. Some of them I've re-read and keep on my bookshelf for no other reason that getting rid of them would be like kicking out a friend. I'm probably leaving a ton of books out, but these are the ones that come to mind:

Thanks to my amazing wife, who is also my Business Manager, No Escape is now available for Kindle:

The Cover for No Escape

Thanks to my lovely wife's computer skills, we were able to come up with an e-book cover for No Escape: 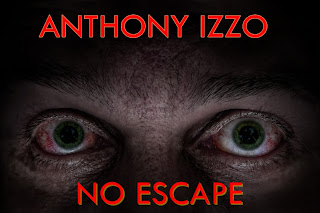 If all goes according to plan, it'll be up for sale on Amazon within the week.

As a family, we've been doing a constant juggling act the past month. My wife is a teacher, and she was picked to be the Senior Class advisor. So that means we've been working the school's concession stand for the Friday night football games. It's kept us busier than the proverbial one legged man in the ass kicking contest, but it's been a blast.

The writing class I'm teaching is going well. My students are bright, articulate, and both have a good amount of writing talent. I think they'll both turn out stellar stories.  I'm finding I enjoy teaching and will be offering the class again in the winter class session.

Due to our hectic schedule, I've gone into guerilla mode when it comes to writing.  Strike fast, get the words down, and get out. Usually on a note pad while in a waiting room, or maybe some pages early on a Saturday morning. I think that's how most writers do it. At least the ones with full time jobs and other commitments. I think there's a myth about writing that you have to have huge blocks of time to do it. Or a special place to write where the Muse comes along and sprinkles fairy dust on your keyboard. If you have that time and space, more power to you. But it can be done in short bursts, too.  Life doesn't stop for writing, but that doesn't mean you can't write.

The next novel is rolling along (almost too well - that scares me). No completion date for that one yet, but the pages keep piling up.
at October 18, 2010 No comments: