I just crossed the 10K word mark on my latest novella. It deals with the effects of a toxic rain that falls on unsuspecting townspeople. I'm aiming to have this fall in the 30,000-word range, but who knows? It could take off into a novel or wind up a long short story.

In the excerpt below, two of the main characters, Tim and Sara, are in a restaurant when the storm begins.

At that moment, the sky opened up, and rain splattered the Stackhouse’s front door, which was all glass. Only it wasn’t rain. Fat, red droplets battered the glass and streaked the door.

Within moments, it looked as if someone had smeared red jelly all over the door.

The red droplets continued to pound the glass. In the dining room, most of the customers had moved to the windows to watch the strange storm.

A moment later, Sara heard the first scream. A woman in a skirt and white jacket stumbled along. She beat at her head. Her hair sizzled and had fallen out in clumps. As the woman faced the door, Sara recoiled.

Her cheeks were scorched, the skin peeling away. Drops hit her and hissed, causing her flesh to bubble and smoke.

A middle-aged guy in a suit staggered along. He had holes burned in the suit. A drop of the red rain it him in the eye, and steam rose from the eye socket. He wailed in agony as the rain bit into him.

Sara shuddered as the woman sank her teeth into the guy’s neck. Blood erupted from an artery in his neck, painting the two of them with it. The guy fell to the ground as the woman clamped onto him, ripping at his neck.

The guy’s legs flailed and kicked. After a few moments, he no longer moved.

I got my writing done yesterday morning before logging on to my day job. Last night, I did this Leatherface sketch. I used a .05 Micron Pen, Pitt Marker (for the black), and Touch markers (for the grays). I've drawn Leatherface a bunch of times, just because the lovable maniac is so fun to sketch.

If you like, it you can purchase a print here.

My favorite of all the slashers is probably Jason. Who is your favorite movie slasher/killer? 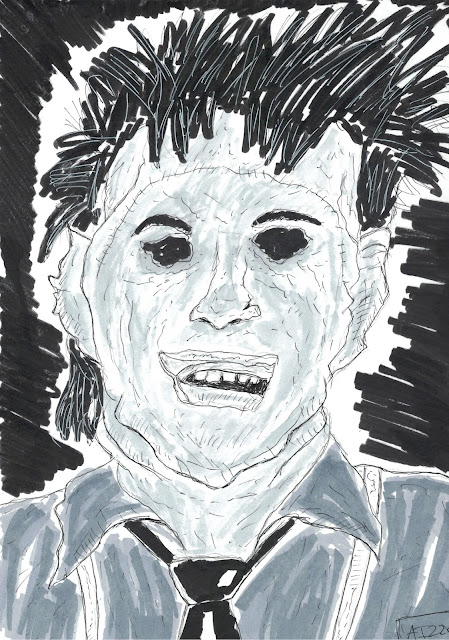 Email ThisBlogThis!Share to TwitterShare to FacebookShare to Pinterest
Labels: Art

I signed up for Canva, something I'd been considering doing for a while. It allows users to create graphics for social media posts, banners, etc. I think you can also make a book cover in there, as well. I'm going to experiment with some graphic/tag line combos to get the word out about my books.

Here's one for Nightshade that I did.

This could be fun, coming up with tag lines and/or pulling quotes from the books. Hoping it sparks some interest. 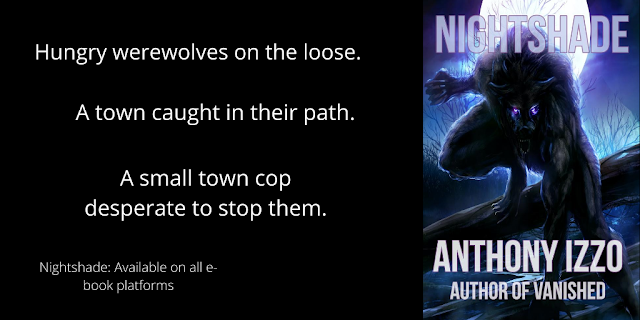 On Friday, I got stung by a yellow jacket for the second time in three weeks. The first sting resulted in cellulitis in my ankle. Got some antibiotics and that cleared up just in time for the second sting. This sting caused my calf to blow up and nasty blisters to form. On antibiotics again. I managed to locate a yellow jacket nest in our garage wall, and an exterminator took care of it.

I spent the better part of the weekend keeping my leg elevated. My wonderful wife took care of things (and me) while I tried to let the leg heal.

Got some writing done on a new novella and watched a few Bigfoot movies (Willow Creek and Boggy Creek).

Recently finished reading An Occurrence In Crazy Bear Valley by Brian Keene, which I highly recommend.

Get Some Werewolf Horror

Nightshade, my werewolf novel, is now available for all major e-book platforms. It's the first in a series dealing with the Nightshade corporation and their collection of monstrous specimens. Nightshade also loosely ties into my novella, The Island.

A paperback version will be available in the next few weeks.

People in Arlen have whispered about the windowless building outside of town for years. It's owned by the Nightshade Corporation, who specialize in capturing unusual creatures. When a delivery scheduled for Nightshade goes wrong, a terror is unleashed. Seven feet of fur and fangs. A genuine werewolf.

Police chief Hannah Sorens is called to the scene of a brutal murder. The victim has been torn to pieces. As she learns the true nature of the killer, Hannah realizes she must track down a werewolf. As the body count rises, and the wolves grow in numbers, Hannah must protect an entire town from a coming onslaught. An annual festival is scheduled to take place in a few days, bringing thousands of people to town. Thousands of potential victims for werewolves on the hunt.

Hannah must form an uneasy alliance with Nightshade if she hopes to save her town from a nightmare come to life. 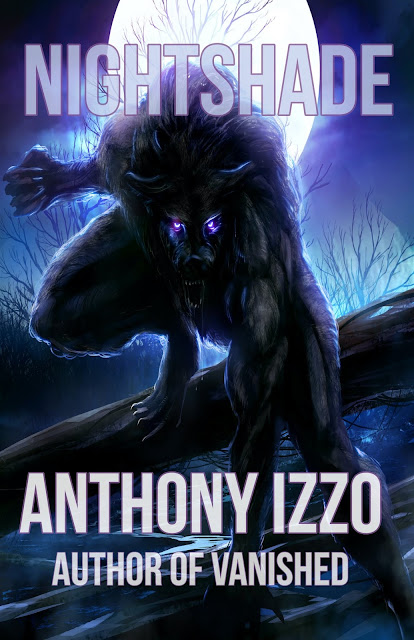