Sketch of The Voodoo Child

I've been playing guitar for around twenty years, and I've recently made an effort to get in more playing time. Between a full-time job, family, and writing, that usually amounts to only 15 minutes a few times a week. I decided to learn Jimi's Voodoo Child. Years ago I learned the wah-soaked intro but never got any farther. So I got the inspiration to sketch the master. When I first started playing, my guitar teacher was trying to show me "Catfish Blues", which Hendrix did on his live Radio One album. My teacher commented "he's such a snake", meaning Hendrix was all over the place and hard to figure out. He meant it as a compliment. 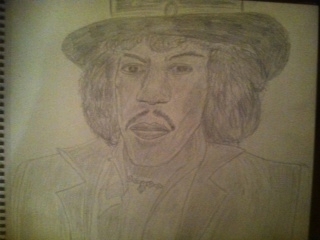 And the master at work: