Enter The Night Gets a New Cover

I've been playing around with book covers, refreshing some of my older ones. I've been wanting to try my hand at creating some art for one of my books, so I settled on Enter The Night. I did the gas mask with Micron pen and ink/brush. I used an old toothbrush to splatter some red ink, and dirtied the rest up with photo editing.

If you read the novel, you'll see how the gas mask ties in. You can get Enter The Night on all e-book platforms. I'll be uploading the new cover soon.

They came to the mountain to hunt ghosts. They ended up as prey. The Iron Mountain Asylum once housed the criminally insane. The worst of the worst. Four men escaped the asylum and were never caught. The legends grew. Some said they lived on the mountain, killing anyone who crossed their path.The contestants on a reality show called Enter the Night are about to find out if the legends are real. Six people. Non-stop filming. A week exploring the abandoned asylum and a military base near the mountain. The contestants will discover that there are things far more frightening on the mountain than ghosts.

Enter The Night has a lot of bloody, slasher horror. What are some of your favorite slasher/psycho killer novels? 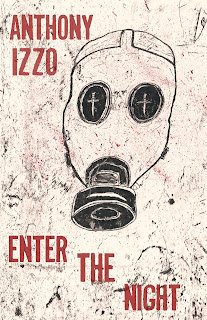