One of the All Time Greats

My grandmother was old school. If you got smart with her, you had two choices of punishment: the wooden spoon, or the yardstick. And don't think you could outrun her. I have vivid memories of being chased down with the yardstick, as if Gram were some type of Samurai warrior out to avenge a fallen comrade.  Believe me, I probably had it coming.

Gram also baked amazing pies - apple and lemon meringue were her specialties - and made a kick ass pot of chili. Her Chex Mix was legendary. I don't know what she did to it, but I've never tasted it quite like Gram made it. She would also play 500 Rummy with me for hours.  Gram was great.

She also pulled one of the best April Fools' pranks I have ever seen.

My grandmother - in her seventies at the time - showed up at our house. She carried a cardboard jewelry box with a lid in her handkerchief-wrapped hand. When she came in we asked her what was up. She proceeded to lift the lid off the box, showing her fingertip surrounded by "bloody" cotton.  She told my father, feigning panic, that she needed to go to the hospital right away. Seems she had gotten careless with a steak knife and severed her fingertip.  She thought they might be able to re-attach it at the hospital.

Dear God, we thought, Gram had cut off her fingertip. It was code red in our house. Get Gram to the hospital, stat.

After my father went scrambling for his coat and car keys, she cheerfully called out, "April Fool!" She then took her finger out of the box and waved it around, to show us it was still in tact.

Gram is twelve years gone, but I've never forgotten that prank.  Truly one of the all time greats.
at April 01, 2011 1 comment: 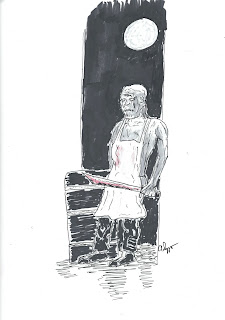