Excerpt of the Week

Going to start posting an excerpt from one of my books each week. This week's is from Enter the Night. You can purchase it as an ebook here. It's also available in paperback at Amazon and Barnes & Noble. Book blurb below:

They came to the mountain to hunt ghosts. They ended up as prey.

The Iron Mountain Asylum once housed the criminally insane. The worst of the worst. Four men escaped the asylum and were never caught. The legends grew. Some said they lived on the mountain, killing anyone who crossed their path.

The contestants on a reality show called Enter the Night are about to find out if the legends are real. Six people. Non-stop filming. A week exploring the abandoned asylum and a military base near the mountain. The contestants will find out that there are things far more frightening on the mountain than ghosts. 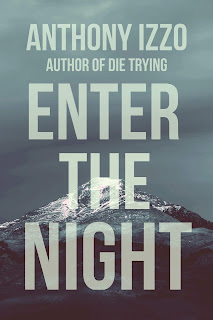 Truth be told, the mountain gives Bob Grey the creeps.
He steers the cube truck up the winding road. Hits the wipers. Snow begins to pelt the windshield. There’s a blizzard coming down from the Canadian Rockies that will hit later next week.
“Getting icy,” he says into the Bluetooth headset.
“Take her easy,” Gary Meyers says. Gary is in the Dodge Ram behind Bob’s truck.
“What’s the name of this show again?” Bob says.
“Enter the Night,” Gary says.
“How about we call it let’s get the fuck off this mountain? I’ll star in that show,” Bob says, and Gary meets this with braying laughter.
He steers the truck around a switchback and continues up the mountain. Takes a swig of coffee from his travel mug. It’s now lukewarm and bitter, but it’s better than nothing. “Why would anyone want to film a reality show up here?”
Gary says, “Couldn’t be Hawaii or South Beach, could it?”
“Honeys in bikinis and drinking on the beach. That’d be more like it.”
They’d passed the abandoned military base at the foot of the mountain, where rusted tanks and trucks sat abandoned behind a chain link fence. Bob is glad they don’t have to drive up to the abandoned hospital near the top of the mountain. He’s grateful to be stopping midway at the lodge.
“Lodge should be coming up,” Gary says.
Bob spots the rustic sign in his headlights. It reads: Iron Mountain Lodge. He brakes and turns onto the road that goes to the lodge.
The road twists and turns. He wishes for a Red Bull and maybe some caffeine pills to keep him sharp. For now, he contends with shitty gas station coffee. Dozing off at the wheel up here would be deadly.
The lodge comes into view: it’s four stories tall. Miles of roof. Hundreds of windows. He knows it was a playground for the rich in the last century. The Rockefellers stayed here on a regular basis. Howard Hughes used to rent an entire floor for himself. Now it looks like it wants to swallow people whole. At least in the dark. It’s probably fine, maybe even nice inside.
He parks the truck near the front of the lodge. A massive covered porch runs the entire length of the building.
Lights appear in his side mirror; Gary pulls up behind him in the Dodge.
He spots the maintenance garage; that’s where they are to park the cube truck. It’s loaded with supplies for the week-long shoot.
Bob has driven truck all over the country. The current gig with Blackmore Productions isn’t bad. The pay is decent. He’s home for good chunks of time. But right now, he’s shivering and wants to be back at the Holiday Inn, where he can order a Philly cheese steak from room service and watch a pay-per-view movie.
He gets out of the truck and the wind screams. He holds onto his Blackmore Productions trucker’s cap to keep it from blowing away. He wishes he’d brought a winter hat.
Gary fumbles with the keys before inserting the right one in the lock. He gives it a turn and cranks the door handle.
“Don’t just stand there. Help me lift the bastard,” Gary says.
They hoist the garage door open and Bob spots a pickup truck with a snowplow attached. There’s also a vehicle with tracks that looks like it belongs to the ski patrol.
The boss wants them to leave the truck in the garage and the film crew will unpack it.
He notices an odd smell: body odor. Like someone hasn’t showered in a month. Once, he’d gotten a whiff of a homeless guy who accosted him for a handout in Nashville. It reminds Bob of that. “Smell that? It’s really rank.”
Gary says, “Probably a dead critter got stuck in here.”
“Smells so bad I can almost taste it. I’ll get the truck,” Bob says.
“I’ll guide you in,” Gary says.
As Bob walks to the truck, Snow whips into his face. The wind moans again. His warm room back at the hotel comes to mind again.
Bob picks up his pace and reaches the truck. He hops in the cab. As he’s about to start it up, he hears a high-pitched scream. Someone in terrible pain.
He keeps a .44 Smith & Wesson in a case under the seat when he drives. Bob’s kept it there ever since being beaten and robbed on a run through East St. Louis. He gets out the revolver and loads it. There are brown bears on the mountain and he sincerely hopes he’s not about to run into one of those.
Bob hops out, bracing himself against the wind. The snow picks up and the garage is now barely visible. It’s going to be a bitch driving down the mountain in this.
He reaches the open garage door. “Gary, you okay?” he calls.
The snow lets up long enough and Bob sees a man with Gary’s body draped over his shoulder. Blood drips down and stains the snow. The man looks back. He’s wearing a gas mask, an olive-drab coat, and camo pants.
He turns and continues walking, carrying Gary like a sack of dry concrete.
“Hey! What the hell?”
Bob raises the Magnum, realizing Gary is in serious trouble, but he has no shot.
The man disappears around the garage.
Bob chases after him.
at May 20, 2020